Last month I was inspired by some Fantasy Film and Opals embossing enamel flower creations that I saw in one of my yahoo groups.Jane Stumpfell had used wire as her flower base.I had a wire material covered butterfly decoration so I used that to create a large sun catcher using Franklin Opals transfers in the wings and Fantasy Film behind it.Once again I used the iron to attach the Fantasy Film and Franklin Opals behind the Opals transfers.If I had layed down the Fantasy Film and applied more Opals using the heat gun the Opals Franklin Transfers would have re-melted and distorted. Below is what the butterfly started out like. 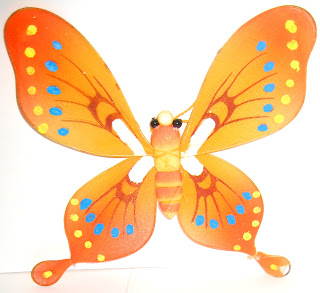 I then pulled all the material out and separated the two sets of wings so I had just the metal wing shapes.In each section I did Opals Franklin transfers of the cherub image.To do this you make toner based copies of the image on copy paper.Trim so slightly larger to the shape of the wing.Apply a generous coat of Versamark watermark clear ink to the top of the image.Place metal wing section over top.Melt Opals Franklin clear embossing enamels and pour it thru the wing shape over the image.Leave till set and cooled.Then take it to a sink partly filled with warm water.Gently rub away at the back of the image while immersed in the water.The paper backing will come off leaving the image in the Opals Franklin.You can see images of the process at my Webshots album . 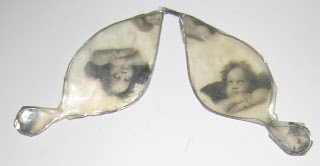 After I had done each section I cut Fantasy Film to fit behind each area and layed it on Glad Bake on the ironing board.Set the iron to cotton,non steam and remove any water from iron.I then sprinkled on Opals Franklin clear(pic top left below)and folded more of the Glad Bake over the top and ironed it(pic 2nd right below).When cooled I peeled off the Glad Bake which gave me Fantasy Film encased in Opals Franklin in the shape of the wing(pic 3rd left).This was then put in place behind the Opals transfers on the wing(pic bottom right). 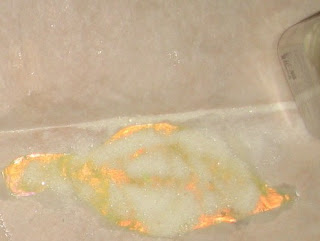 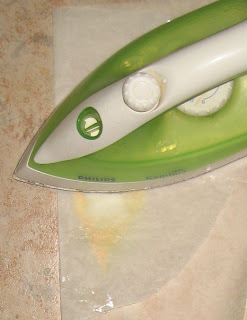 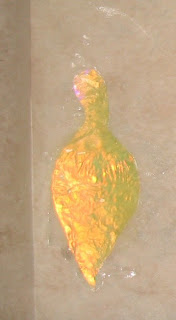 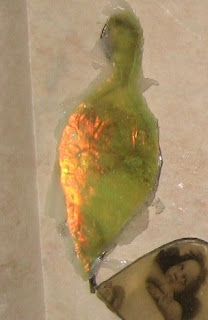 Once more I folded the Glad Bake over the wing section and ironed it so the Fantasy Film and Opals part adhered to the Opals transfer part of the wing.When I had done all section I used a pair of scissors to trim close to the wire edge.In sections that were too thick for the Scissors I used a Clover quilt iron to melt off the excess.Once trimmed I applied a coat of Plaid royal coat Dimensional Magic in clear and sprinkled in some glitter.After that had set hard I rejoined the wings with wire and placed copper tape along all the edges. 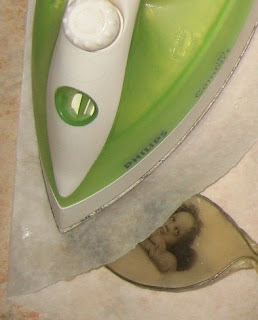 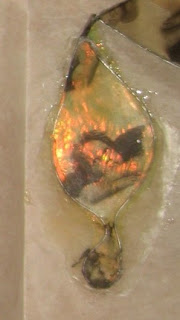 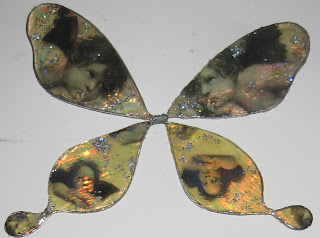 From my scraps of Opals paper I had a lovely piece of brown stained tissue and Vilene with strips of Fantasy Film and Opals Franklin ironed into it.This became my stamp surface.I stamped the belly dancer image from After Midnight art stamps on it using Neopaque white paint.I added a fabric ink stained flower at the top and Krafty Lady face mould plus I added some beading to the belly dancers clothes and used this as the body for my butterfly.At last my butterfly dancer was completed. 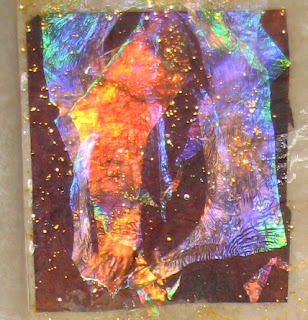 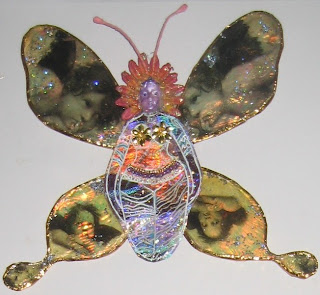 Posted by ANNETTE HUSBAND at 10:27 PM 9 comments: Links to this post