Revamp and THE Snails :o)

We finally had a good rain storm this afternoon.It was so nice to smell the wet Earth smell of the Wet season rains....the cool breeze...and the drop in the oppressive heat.The rains mean the grass and trees will once again look green and new life starts over again here in the NT.One thing that happens is the land snails return to feed on the grass.Two years ago the kids painted the back of some of the snails with markings to see if they would come back.Last year they did.Tonight Tim checked and there again were three painted snails feeding on the grass.We could not believe our eyes when we saw them.Grant tells me they bury themselves in the dirt in the Dry but even he was unsure how long they lived for. 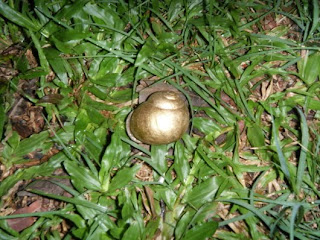 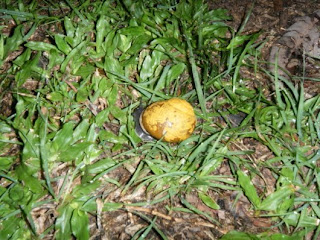 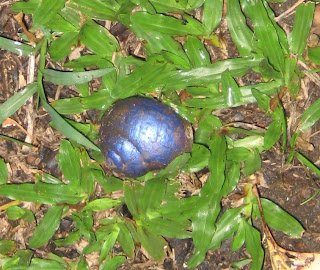 I'm just glad the metallic paint didn't kill them...wonder who will come back next year. I have also done a blog upgrade today using images from here .Hope it looks OK
hugs
Annette In Oz
Posted by ANNETTE HUSBAND at 10:12 PM 2 comments:

OMG you folks are fast...all ATC's are traded.I'LL try to get them in the post tomorrow and I look forward to what the posty brings :o).Below are the gals I'm painting on canvas with their undercoat skin on.....alias my aliens *grin*.My ladies are from memory and not meant to be realistic looking.This is "seeking" and I want to add an etched metal heart to her body for seeking...love. 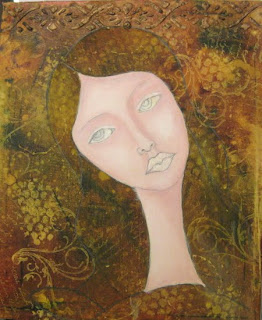 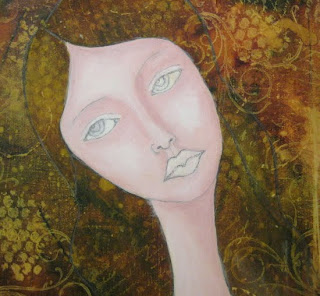 I haven't named the next one...she looks so sad at the moment....any ideas? 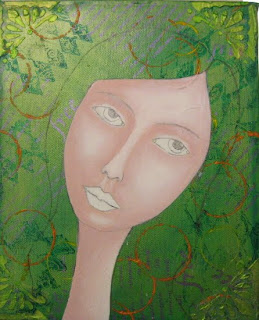 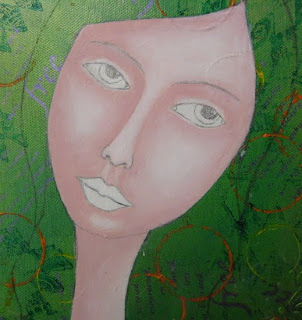 The skin colour will change with the top painting so she wont look as red in the end.Next is the eyes and lips....maybe a blue eyed blond for seeking and red haired amber eyed for ????
hugs
Annette In Oz
Posted by ANNETTE HUSBAND at 10:31 PM 4 comments:

I have three etched metal ATC's available for trade.There is a copper Oriental Dreaming one.It has bamboo in the bg and cranes dancing. 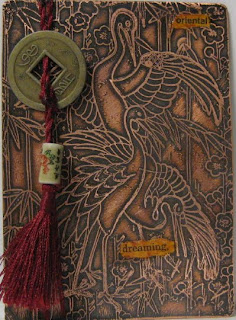 The next etched metal ATC is a nickle silver one called "Floral Fantasy". 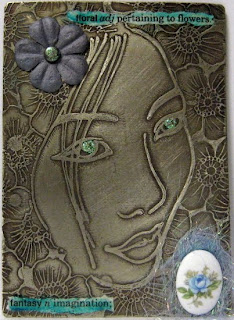 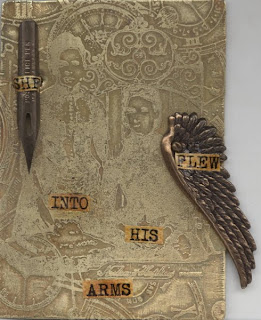 There was another etched brass ATC called "measure of a man" but its already taken and on it's way to someone.Here is what it looks like. 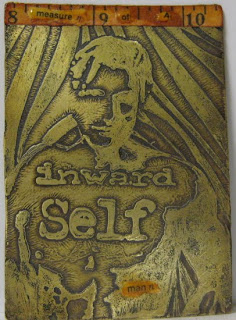 Mary's etched metal house is on its way.I etched a base of flowers and wrote her name in it for the house to sit on.Hope it travels well and gets to you safely Mary.For the rest of the day I'll be painting the under coat skin tones onto my two ladies that I have drawn and copied onto canvas.They always looks like aliens at that stage till I do their eyes and lips.

In The Mean Time

Mary has contacted me...I had a wrong e-mail for her and she is so delighted in winning the etched metal house.I thank you all again too for entering and your kind words.Over the two weeks of the draw I have been creating quietly in the background.I've made four etched metal ATC's,three etched metal flat house shaped necklaces inspired no doubt by Jen Crossley and Stephanie Lee's book "semi-precious salvage" which my daughters snaffled up.I also managed to fix two other past projects and start two painted ladies on canvas.
The etching process works really fast here in the tropical heat but I decided to leave the ATC's in the etchant for 1hr and I love how deeply etched they are.The one below was for a return to Linda Aldred.The wings move and there is alcohol ink on the wing and the "fly" word.It has black patina added after etching.I'm getting much better at drilling in metal now...thanks too Jen for showing us how :o) 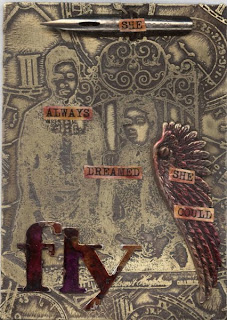 This was my first ever attempt at soldering(again after a much appreciated lesson from Jen C) and it took me AGES to add the jump rings LOL.Then I realized the one at the right is slightly smaller then the other one afterward.Oh well its just for me anyway LOL.I finally got some silver glue on bails to add a chandelier dangle and its done at last. 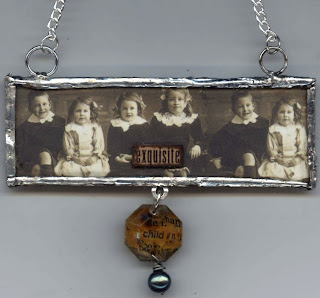 This was a pin I had previously made but I took the pin back off and drilled holes to make it into a necklace as well. 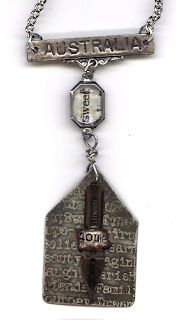 The other three metal Atc's Ill upload shortly and I'm thinking to offer them as trades.Two more evenings to work and then hope to have two days off at last.Last week at work was a nightmare with me doing double shifts and extra shifts on my days off.As soon as the heat and humidity hit(40C Degrees last few days and 90 plus percent humidity)spare RN"S disappeared and have gone South.Several of our permanent staff have also left *sigh*.Disconnecting the phone line for two days may be the go I think.I'm still painting my ladies so want to get them done and dusted too.There are too many bugs at night to paint later in the day but the days are so hot the paint dries really quick...may take a bit to finish them
hugs
Annette In Oz
Posted by ANNETTE HUSBAND at 1:09 PM 9 comments:

Hi all
the winner has been drawn.I used EVERYONE who entered including people from Overseas and e-mails.The last e-mail or blog comment received was from Karen S.YES I was sure I wanted to give this away and thank you so much for all your encouraging and lovely comments.I'm sorry I could not respond to all of you.OKies the winner is


Thanks to all who entered and congrats to the winner MARY FENTON.Mary I just need your address so I can send the house on to you.I believe Mary has been really ill with pneumonia so hope the little house brightens your day a bit and you are on the way to good health and creativity soon.
hugs
Annette In Oz
Posted by ANNETTE HUSBAND at 11:34 PM 6 comments:

Etched Metal House Completed...READY to Give Away

At last the etched metal house is complete.The walls are attached and steady and the roof is on...all windows and doors open Ok.My etched metal house is 11cm high and 6cm at its widest.This is the first time I have made something personal to give away so I am hoping it goes to someone who will treasure it.If anyone would like to try to win the etched metal house all you need to do is leave a comment and your first name so I know who you are.If you don't have a blogger account then just send me an e-mail instead(its at the right hand side from here).After two weeks I'll randomly draw out the winner. Oh If you want to see the detail more of each side look at the posts below this one Ok.They also explain a few items that I have used as well. 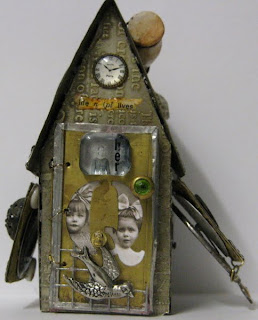 Front door above and door open from the side below 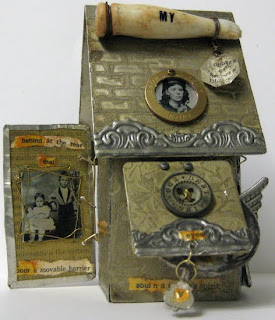 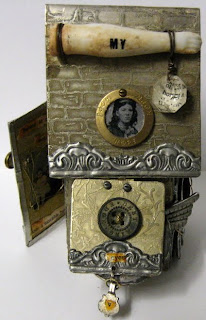 Other side window is next 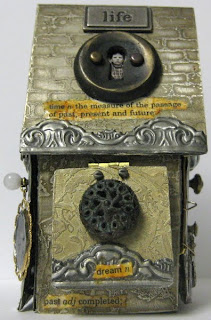 Lastly is the back door 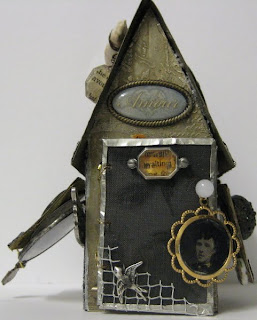 and with its door open 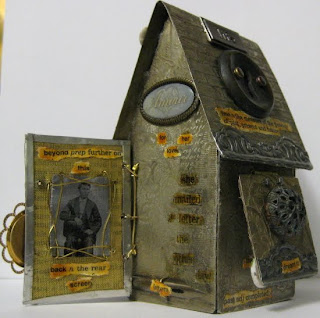 How exciting and I look forward to seeing who wins the house that Annette built LOL
hugs
Annette In Oz
Posted by ANNETTE HUSBAND at 8:05 PM 76 comments:

Yeha the back door is also done now.I've made this door a screen door.Trapped within the patina treated copper mesh is a vintage man image.The handle is another vintage coat button from my Aunt Betty.The brass charm holds a faux tin type and under the beveled plastic is the word "waiting". 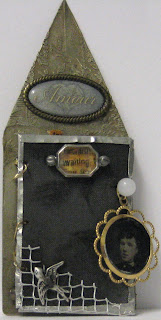 Under the door there is brass mesh,another faux tin type and more dictionary words 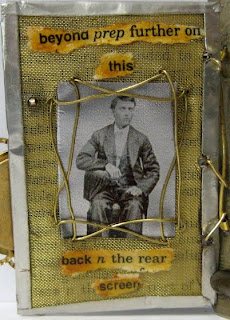 At the back is a metal etched young lady.The words from the stamp didn't etch well so I stamped them again on tissue and added them later.They say "she mailed a letter the other day".I've tied on an old pen nib for her to write with.My dictionary letters from front to back read "waiting beyond this back screen for her love letters"

OH my goshie now I have to see if I can assemble it all to be an actual 3D house.Not sure whether to solder the joins or do some fixed hinge thing...off to play with it and see what goes :o)
hugs
Annette In Oz
Posted by ANNETTE HUSBAND at 1:50 PM 4 comments: