Today I spent most of my time making nappy liner rubbing backgrounds.This was also something I had learnt from Dale Rollerson at the Art retreat I mentioned in my first post.It's easy and fun.Sometimes it works better then others so is unpredictable. Firstly I made some drawing ink and water backgrounds by spritzing a sheet of clear overhead transparency with water.Then randomly drop drips of two colours of drawing ink on top.They spread out and burst into colour. Lay some cheap gloss card gloss side down into the wet mix and lift it back up. Place on news paper to dry. It will bend at the edges but straightens out smooth again once it dries. I use Shiva paint sticks and cheap nappy liners.With some of the liners I painted them with Lumiere's(shimmery metallic fabric paints) first. Select a surface to rub over. I used some plastic rubbing plates I got from The Thread Studio .Rub several colours of paint stick on top of the liner held in place on the rubbing surface till you are happy with the look and the liner is covered. Once done I place the rubbing coloured side up onto the card stock I made earlier. I put this between two sheets of Galdbake and ironed over the surface using a very hot dry iron setting.The nappy liner burns off and the paint stick part sticks to the surface. It works better on a matt surface as the gloss was a bit too slick. To overcome this I then added some Vliesofix between the liner rubbing and the gloss card and ironed and that looked good too. 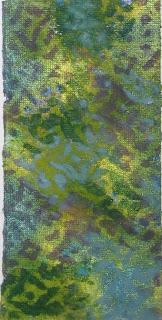 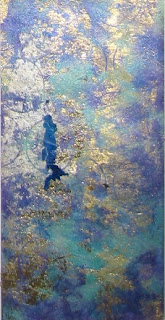 Posted by ANNETTE HUSBAND at 3:24 PM

Hi Northern woman, Im a southern woman all the way down in Albany W.A. I love these nappy liner prints too gorgeous. What i like about the one on the right here in blued is that ink blotch mark looks like a little sea siren amongst the sea weed...can you see what I see and the little tail...way cool and i love your blog too so lets be friends LOL Michelle

LOL Michelle...yes I do see the little mermaid looking blotch..it came out darker as the gloss card surface peeled off in that spot.It was a great class I did with Dale Rollerson from the The Thread Studio in WA and I learnt so much in a day.Friends we are then :o)
Annette

Fabulous backgrounds - I love the blend of colours and shapes - wow!!